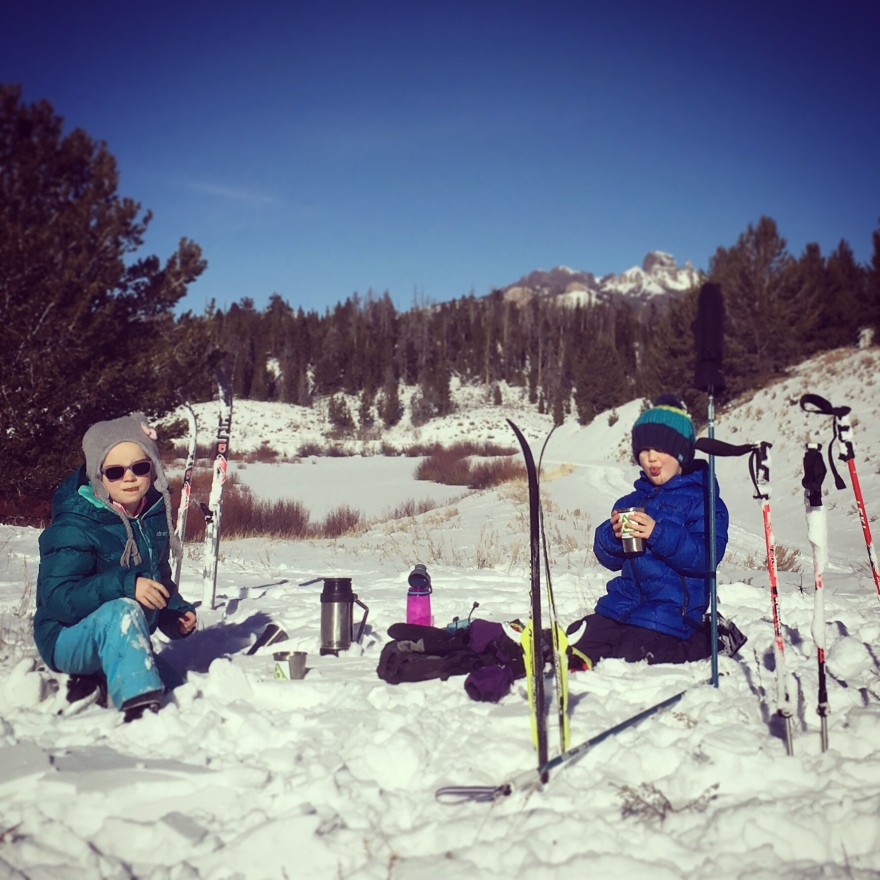 The holidays have come and gone.

Thanksgiving left me so full of gratitude that my mouth was sore for two days from smiling and laughing. The human beings we have been matched up with to serve as our family out here are simply incredible. We are lucky to celebrate our holidays and our birthdays and our ordinary days together.

December brought us many new adventures.

We began with the Christmas Concert. Preceded by lasagna and meatball dinner at Shank’s. It was lovely enough.

Team Neidens put fancy clothes on and drove to Jackson to attend the Ballet. Not The Nutcracker….Alice. We dined at the Brew Pub on hot pretzels first. It was a fine holiday date. It wrapped up with a sleepover with Czas and Joe and William. And a cross country ski attempt at Deception on the way home. It was the first round of skating at the pond. It was so fun, i vowed to keep it clear all month. On the days i picked the peeps up from school, they insisted i have the skates ready in the truck and gum to chew so we didn’t have to go home first.

The homies committed to participate in their first play. They attended rehearsal after school for two weeks and performed at the Assisted Living Center the week before Christmas. Notch was Boy #1 and Crit was JoJo. The name of the play was “A Home for JoJo”. She never mentioned that she was the star. It was adorable (and i rarely use that word).

‘Ol Dart wasn’t around as much…he didn’t need to be.

We bought gifts for a local 3-year old girl. It was Crit’s idea. She also asked Santa to bring her nothing and take a bag of her toys up to the North Pole to redistribute them. Later, she told me that asking Santa for “nothing” really means that she would love whatever he wants to bring her.

Nanny and Pa arrived by school pick-up as the peeps were released for Christmas break. Pa seemed phased by the journey from town to our place. A real over-the-river-and-through-the-woods kind of holiday.

We took them to the Luke’s solstice birthday party. They were impressed with the Bacon Bombs. who wouldn’t be.

We got a couple dustings of snow. few inches here. few more there. i continued to clear the pond. We continued to skate. morning and night. and under the LED light bar and under the light of the full moon. Crit grew from the skateboard technique to full-on two legged skating. She put in the time, and it paid off.  Notch prefers to be pulled around and sling shotted. I put in many hours on the ice in December. It became my yoga practice for the month. It took just over 2 hours to clear it each time, and i always came back inside a wee bit clearer and a wee bit fresher. i began to take some pride in the work. the surface was as smooth as i’ve ever witnessed on a pond. until New Year’s Eve. when the snow banks calved baby glaciers and my zamboni like pathways gave way to lumpy ice floe. that’s part of the yoga practice, i reckon. letting go of attachment. letting go of expectation. delighting in impermanence instead of wallowing…

We feasted with Nanny and Pa. were read countless books. and listened to new stores each day. we adventured in the side-by-side and went on daily moose searches. we baked cookies and rice pudding. we picnicked in the snow and skied all the roads and hills. we sledded and shoveled and hot tubbed. we put cookies and carrots out for Santa and his homies and we kissed each other good nights and good mornings. Nanny and Pa got a chance to join our tribe for Christmas Dinner and feel the energy that embraces us throughout the year.

No sooner did we drop my folks at the airport, the next wave of visitors arrived. We continued to feast and explore and adventure. More skiing, more skating, more sledding, more eating, more drinking.  We skied under the full moon light and i finally got to get up on the bench and look back to our Christmas lights. we hot tubbed some more.

If December is “the holidays”, and the holidays are about spending quality time and making new memories with your dear friends and your family, then we nailed it this year.

Homies went back to school yesterday. i miss having their little steamy breath, poly-pro wearing bodies sharing space with me out here. i miss their snow pants hanging over the gate and the piles of mittens and hats in front of the pellet stove. i miss the afternoon happy hours that have turned into tea parties. i miss the lazy mornings, lump loving on the couch…

One thought on “December to Remember”

Fish on
10.
Been 30 years since we shared the same zip code…
2…6…19…
50 years seems like a remarkable feat. Thank you for teaching us that love is all there is.
Birthday Eve
Birthday Adam
That kinda month, I guess.
Chasing rainbows.
July announcing its arrival with style.
Birthday celebration for Betty, Brit, and Aena!
I dig getting to plan the day.
Happy Mother’s Day, Mom. What a thing you started…and what a thing you’ve handed down. Love you.
Easter is different here.
If having a good time in the desert for spring break were a career, we could be professionals.
Somehow, moving at the Florida pace of leisure, makes time speed by too quickly.
They are pro at having a good time.
Olympic Fever
Follow Dream Your Life…Live Your Dream on WordPress.com