today the macaroni-piggies went over to Grand Teton National Park. or Grand Tetional Park as Crit called it all day.

there was resistance right out of the gate. and a wee struggle to get it together and out the door.

it started raining as we climbed out of the valley, up the pass. we called an audible and drove Flagstaff Road.

the moment Debul’s head nodded off,Crit picked up our conversation from the evening before lickity-split.

…we were riding our rig from the Moose Willow into town to attend a fundraiser. (i have no photos to display of the rig, because i am most often alone when rigged-up. and the effort it would require to get a selfie crosses all lines of modesty/vanity that i hold right now.)  It is my 16 year-old mountain bike with an i-bert mounted on the front fork that sits right in front of me, and an attached chariot being trailered that can seat two, but seems to be was easier when there is only one. 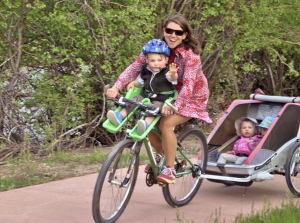 Debul fell asleep (obvi this is what he does). Crit began questioning me about what to do if she encounters all sorts of different animals: bears, elk, moose, badgers, deer, wolves… moms and babies, dads with babies, dads and moms with babies, if they are eating, what’s a carcass? what’s a rut? what’s instinct?…

and she was firing the questions, i was pedalling up the hills, knocking the same exact spot on the inside of each knee on the hot plastic green seat every 6th-11th pedal stroke. trying to maintain my breath. attempting to be comfortable in my discomfort. i asked for a talking break (i do that periodically throughout the day). and then i said (because the stack of challenges at that moment already placed me in my in optimal growth zone) “How about when the talking break is over we have a new topic to discuss? Your choice. Think about it and tell me at the top of the Scout’s Pond switchback. It can be about anything other than animals”

IMMEDIATELY, she stated “No, Mommo. we HAVE to talk about the animals. I am LEARNING about what to do if i see one and you aren’t around, or no grown-ups are around. We have to keep talking about it until i know.”

i was short on breath already. and she took the rest of it away.

and we talked about all sorts of situations the 15 miles from our house to the Dennison Lodge. and when Debul woke up, she repeated word-by-essence, essence-by-word,  everything we talked about.

and we saw a wolf. a gray wolf with black feet and socks. alone in a hayfield. and since we were on a bike, we got to be with it for a while.

today we arrive at String Lake, after holing up at Leeks Marina with a pepperoni pizza while the rains subsided (we don’t have a single pizza shop closer than 1.5 hours away). we hop out of the car, sunscreen up, grab a full water bottle, bear spray, the blue backpack, and the ergo just-in-case. we emptied out a blueberry container so that we could collect our bountiful harvest of huckleberries along the trail. Debul squawked “HUCKLEBERRIES” over and over in the parking lot. i must have done a great job selling the activity.

we set off on the trail and see a couple of signs about bear activity. they ask about each one. i stop and read them. Crit comments on the engineering of the log-box steps. she likes them. and she and Debul alternate running to the edge of sight and moseying back. no one needs ANYTHING. we are all in our optimum space.

Crit bounded up a little hill and exclaims “I have a really good-eye! i saw it. i saw bear poop.”

and all i see are some dried up pine cones. and i begin to formulate what to say, when she steps aside to reveal an impressively large pile of FRESH bear scat. she nailed it.

and then she turn to Debul and says “Dev, there is a bear here. we have to belly breath and not be afraid, but be aware. and look out if you see babies!”

and we walk along. asking the several park rangers and volunteers that we passed about the huckleberries. i’ve never not seen ANY! and we see a cow elk munching on some grass through the trees to the north. and the wee peeps see it, from a couple different places as we walked along the trail. and we passed a family who looked out at what we  were looking at and exclaimed “a moose! look its a girl moose!” and Debul looked up at me to get validated “that cow elk mommo?”.

we travelled a solid mile. moseying about. checking out every access spot to the lake. running our fingers through all the bushes lest they be carrying a lone berry living an isolated life. and we rummaged up a few. enough to snack, not enough to stockpile, which is what we were hoping for.

we found a place to pee together “out of the public”

when we turned around after a mile, no one asked to go in the backpack.

we passed another family travelling in the opposite direction. the dad proclaimed “oh, look…here is a bunch of moose scat”. and we nodded to each other as they passed. then debul turned around, stopped me, made me look at it, and said “that not moose poop. that horse poop.” and he nailed it. not just cognitively, socially too.

about .5 miles from the parking lot, we passed a friendly ranger. she saw us unloading from the car in the parking lot. she asked about our journey and we lamented our misfortune of the huckleberry harvest. she told us the entire String Lake area was closed due to “bear activity”. she instructed us not to go “swimming or anything”, just to go back to the car when we got back to the trailhead.

we said cool. that solves that. we’ll head out in search of ice cream instead of swimming.

as we walked away she shouted “He was saying HUCKLEBERRY in the parking lot! I thought you were going to meet Uncle Barry! hahahah!”

and we loaded up in the new ‘bu. and headed back over the hill. and they ate their picnic lunch sandwiches in the car. and we got a huckleberry milkshake and a chocolate cone at the Dubois Drugstore.

it was one of our best days of summer.